i am here to share this healthy brownie recipe that is BEYOND fudgy and dare i say a chocolate-lover's dream! this recipe is perfect to start incorporating a favorite, fall flavor into our lives...pumpkin! have you ever realized how versatile canned pumpkin is? i didn't realize it until making this recipe and now i keep thinking about what else i can use pumpkin to make. it is fall now after all!

in this recipe, the pumpkin acts as an alternative to the eggs and part of the oil that would typically be needed in a brownie batter. and guess what, it doesn't stop there! what does everyone look for in the perfect brownie recipe? is it the rich chocolate, fudgy texture or all of the above? the canned pumpkin plays a huge role in making these vegan pumpkin brownies fudgy and delicious. and too be honest, if i'm going to eat brownies they must be decadent with a rich, chocolate flavor and most importantly, have the ULTIMATE fudge factor.

this recipe hits both of these and absolutely no disappointment. this leads me to the question, what can't pumpkin do?

the only thing pumpkin can't do in this recipe is make these beauties for you. but that's okay! this recipe is so easy to follow, using simple ingredients and no fuss in the kitchen.

whether you have a fall get together with family and friends coming up or just want to do some fall baking for yourself at home, these vegan pumpkin brownies are just what you need. 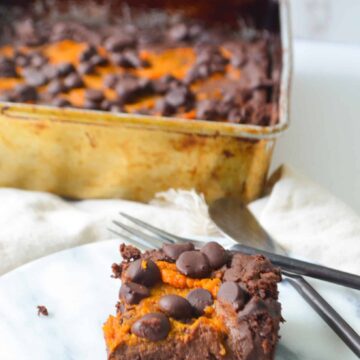 Jess Selensky
the fudgiest brownies that you could ever dream about. not only that, but these are fall friendly using pumpkin! the pumpkin adds a delicious element to your typical brownie recipe. these are sure to become a fall favorite in your household for years to come.
3.50 from 2 votes
Print Recipe Pin Recipe
Prep Time 30 mins
Cook Time 25 mins
Total Time 55 mins
Course Dessert, Snack
Cuisine American
Servings 9 brownies
Calories 170 kcal

i love all things food and travel. i'm guessing you do too since you're on this page, and i'm so glad you are here! i hope to inspire you to book that flight, try out some new food spots or make a new recipe.

#1 SECRET to getting the CREAMIEST smoothie is…

all the pretty girls DO THIS… make blueberry do

SWIPE ➡️ for a close up of my TIRAMISU BAKED O

is there a better burger topping than caramelized

when i run out of my homemade chia seed jam, i imp