this healthy donut recipe is made with clean ingredients and only 100 cals per donut! who says you can’t stay on your healthy lifestyle track and still eat a donut?! thanks to this delicious baked apple donuts recipe, you will never miss out on eating this fall favorite again.

now who’s ready for some fall baking?! here we have the first of many fall recipes to be left on my kitchen counter for my family to devour. it’s safe to say that apple donuts are by far one of the most popular fall treats that we all anticipate each year. these baked apple donuts are no different…they didn’t even last 24 hours in my household!

you usually have to drive far to get top notch apple donuts at a farm but no more my friends. you can stay at home AND have your apple donuts too. how? with this baked apple donuts recipe! this recipe hits the top three important factors of what i look for when making a new recipe. what are they? the recipe is easy to make, uses simple ingredients and has a delicious flavor.

this healthy donut recipe contains no processed sugar, no butter and gluten-free flour. it couldn’t get better than that for eating clean while still enjoying what you’re eating. the best part? you probably have majority of the ingredients in your kitchen just waiting for you to use.

who’s ready to let the fall baking begin? i know that i am! 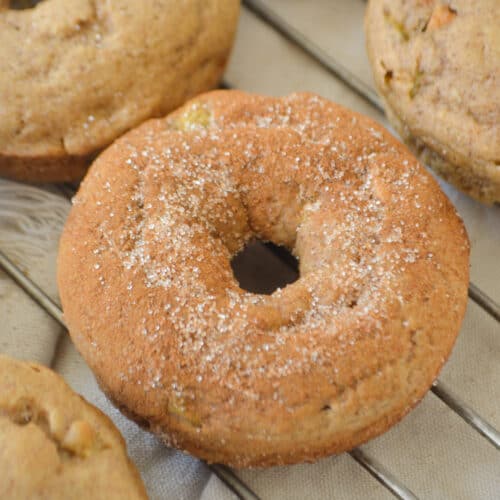 fall baking is just simply superior and so are these baked apple donuts. they're made with few, clean ingredients and absolutely DELICIOUS. so don't deprive your family and friends, or even yourself. make these healthy, fall donuts to kick off the season in the best way! filled with cinnamon and apples, you will not be disappointed.
5 from 20 votes
Print Recipe Pin Recipe
Prep Time 10 mins
Cook Time 15 mins
Total Time 25 mins
Course Breakfast, Dessert, Snack
Cuisine American
Servings 6 donuts
Calories 100 kcal

for the cinnamon sugar coating

i love all things food and travel. i’m guessing you do too since you’re on this page, and i’m so glad you are here! i hope to inspire you to book that flight, try out some new food spots or make a new recipe.

this is the official petition to have coconut stan

anyone else do a dance when food is super good ?!

i freezed my 🍑 off today in tennis so now i’m

what’s your favorite kind of donut? mine is @h

**NEW NEW** pumpkin spice french toast for all my

friday’s mean breakfast in my pjs 🥳 who am i