single serve cinnamon roll is the perfect recipe for when you're craving that fluffy dough paired with cinnamon sugar filling. it's easy to make, delicious and gluten free friendly.

do you ever crave something so much that it's all you can think about? well that was me when i wanted a cinnamon roll a week ago. i couldn't get it out of my head!

therefore, i created this recipe. a single serve cinnamon roll that takes little time to make and is absolutely delicious.

you can multiply the recipe to make as many cinnamon rolls as you need or stick with the one!

when i make this recipe, i like to use a flavored butter such as maple cinnamon or a honey butter for added flavor. however, regular butter will work just as well!

now let's get rollin' with it and talk about the ingredients.

what is a cinnamon roll?

besides being a magical creation there is a more specific definition! a cinnamon roll is a sweet baked dough dough filled with a cinnamon sugar filling. usually also topped with a sweet glaze or buttercream frosting.

how to make a cinnamon roll

what's the different between a cinnamon bun and cinnamon roll?

cinnamon buns typically have nuts in their filling and are flipped upside down after baking. they also do not have a frosting on top.

cinnamon rolls traditionally do not have nuts in them and are topped with icing after baking.

do i have to use gluten free flour?

nope! you can use regular all purpose flour. i don't recommend using almond flour, coconut flour or oat flour as that may affect the final result.

nope! the baking powder does all the rising it needs to make this cinnamon roll.

can i bake this in the microwave?

you can try! however, i have not tested this and recommend baking in the oven to get the right results. however, i will test this recipe in the microwave and will report back to update you on if it works!

can i make this ahead of time and store it?

you can make this cinnamon roll ahead of time, however, i wouldn't recommend more than 1 day before you plan to eat it and suggest heating it up! however, it is best enjoyed fresh out of the oven!

if you try this recipe, please consider leaving a rating and comment at the end of this blog post. it is incredibly helpful to my small business and to your fellow readers! 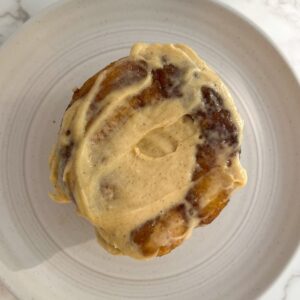 if you try this recipe, please consider leaving a rating and comment at the end of this blog post. it is incredibly helpful to my small business and to your fellow readers!

i love all things food and travel. i'm guessing you do too since you're on this page, and i'm so glad you are here! i hope to inspire you to book that flight, try out some new food spots or make a new recipe. 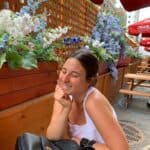 happy #nationalcookieday 🍪 one of the best way

now that thanksgiving is over… on to CHRISTMAS

EASY BAKED ZITI 🍝🧀 this is the perfect reci

have you ever tried chocolate hummus?! this is y

you’re going to fall in love with this olive oil

PUMPKIN BUTTER BOARD 🧈🍯🍞 this is the per

anyone else in a committed relationship with…avo

would you add squash to a yogurt bowl?! 🍠🥣